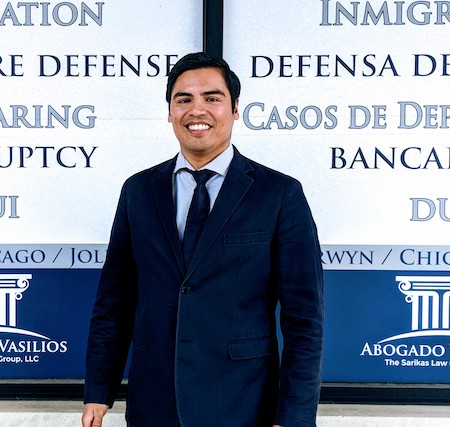 "I think it’s important to maintain a connection with the community you’re working with. One of the [ways] I define my professionalism is to maintain some level of community service."

EJA: Tell me about the work you do with your firm.

John: I work at Sarikas Law Group. I am their senior immigration attorney. I concentrate mainly in family-based petitions, removal defense, and immigration court. I do a lot of student visas, or non-immigrant visas in general.

EJA: Do any of those categories of cases command the lion’s share of your time?

John: It depends on the year, and the time of year. Right now the lion’s share of my time is dedicated to I-601A forms, the provisional unlawful presence waiver, which was initiated by President Obama. Essentially it allows applicants, prior to their leaving for their residency interviews in their country of origin, to seek a waiver for the time that they’ve been here unlawfully. That combined with maybe removal defense in court.

EJA: Why are you seeing so many of those types of cases?

John: Maybe there’s some fear that it’ll be eliminated under the Trump administration. There is no indication that I’ve seen yet that he’s weighing that as an option. But given the trajectory between he and Attorney General Jeff Sessions, in terms of wanting to remake the Immigration and Nationality Act, and the way the Department of Justice should handle immigration court in general — it might be a possibility.

EJA: Tell me a little about your career trajectory. What got you to where you are today?

John: I went to John Marshall Law School here in Chicago, graduating in 2013. I did a summer at the Legal Assistance Foundation under Lisa Palumbo and the immigration department there, utilizing the Equal Justice Alliance fellowship. That introduced me to immigration law — mainly the T and U visas, which are focused on women who are victims of criminal acts or trafficking and can seek certain waivers so that they can be in this country, get a work permit, and ultimately obtain their legal permit residency. After I graduated I worked at a firm, Shiller Preyar, mainly because of an individual who worked there. He was one of my first mentors in immigration law: Chris Bergin. It was through a church that I got connected with him. I was living in Chicago at the time, and I started to volunteer my time at a local church that had a non-profit as well. They do an immigration ministry. I got to meet a lot of people in the immigrant community in Chicago who really needed an attorney. It was around the time that DACA was being initiated. So I was helping them out with their legal program as it related to DACA. I worked under [Chris Bergin] for about three years, worked at another firm that concentrated on immigration law, and then I got the offer here at Sarikas last year.

EJA: You had the fellowship with Legal Assistance Foundation in summer 2012. Tell me about how that experience became a defining moment in your career going forward.

John: I wanted to work at a non-profit. There aren’t that many that work with the immigrant community. I think [it’s a funding issue], because federal dollars maybe can’t support that kind of work. But here was one, Legal Assistance Foundation, that did have an immigration and workers’ rights department, and I had heard great things about Lisa Palumbo. They’re very concentrated in workers’ rights and U and T visas. The majority of people applying for them are women who are survivors of domestic violence or some sort of criminal act committed against them. It’s also men who suffer certain forms of aggravated battery. I got introduced into that world in Chicago, [and] a slice of the Immigration and Nationality Act. It was amazing. The reward I felt in working with this population was not something I was expecting. There is so much at stake for a lot of the applicants, and I got to understand how a non-profit operated day to day, all the way through a successful application being filed.

EJA: Would you say it created in you a particular interest in assistance with domestic abuse and violence cases?

John: The Immigration and Nationality Act is massive, so this is just one of the areas I was able to familiarize myself with, so that I could take it anywhere I wanted. It was also a jumping point for me to push forward with the idea of concentrating in immigration law. There’s a combination of my personal story with wanting to do something in my professional life that was the right fit for me.

EJA: What about your personal story figured into the decision?

John: My parents came from Colombia, so it was the experience of seeing how an immigrant family can struggle in the United States raising a family. These were things I witnessed growing up. So it’s a community that I am very familiar with. I can speak the language. I can relate to a lot of their struggles. So it was just natural for me to fit into this community.

EJA: Was Lisa Palumbo your mentor while you were on the fellowship?

John: Yes. It’s always great to work with people who give off such an energy with the work they do. And it’s inspiring to see someone in this field that can be so draining. The administration we live under now is just one of many where we’ve seen how the immigrant community is being used for political purposes. And seeing someone who can remain motivated across administrations, given the different pressures that the community faces, was something that was long lasting for me. So it was important for me to see those professionals as I was working my way up through my journey through law school, and figuring out where I might fit in.

EJA: What advice would you give to current law students and/or EJA fellows if they were considering pursuing this career path?

John: I think it’s important to maintain a connection with the community you’re working with. One of the [ways] I define my professionalism is to maintain some level of community service. Being a lawyer can be draining. Listening to the stories can be taxing. I was a teacher once, and one of my mentors [said], “If you don’t feed the teacher, they’ll eat the students.” I think the same is true in law: if you don’t feed the lawyer, they’ll eat the clients. We become self-destructive, we become jaded. For me, giving back is that element that provides a reset, because there is a great need to help. There’s always room for more, if your life allows for it.

EJA: You have been giving back on the side since you entered the profession. Can you talk about some of the volunteer work you’ve done over the last few years?

John: I mainly work with two organizations. One is Familia Latina Unida, a non-profit based in a church in [Chicago neighborhood] Pilsen. It was founded by Elvira Arellano, a woman who took sanctuary at the church after 9/11. I believe O’Hare was raided, and she got picked up while she was working there. Beautiful people there. I have tried to help them, since law school, to manage their legal department, because they are an immigration ministry. They have lots of mixed-status families, lots of people who are undocumented. So I go there and do workshops on their rights as immigrant and undocumented person. I help them with citizenship applications. Those kinds of things. I also work with the League of United Latin American Citizens, mainly with Julie Contreras. I’ll do some workshops when they need them. For example, when the refugee crisis hit our border a few years back, I would do a lot of workshops related to asylum law and special juvenile immigrant status, and consultations with families to let them know what to expect in removal proceedings. They’ve also taken me to to the border. I’ve gone to Mexico twice now with both of them, Familia Latina Unida and LULAC, to try and reunite families who have been separated due to three- and ten-year bars under the humanitarian parole section of the law. We’ve done that successfully a few times.

EJA: I believe you received an award named after Elvira Arellano a few years ago. Do you want to say a few words about that?

John: I did. It was Elvira Arellano and Pastor Emma Lozano — actually the pastor that married my wife and I. They recognized me for the work I was providing to the church. I was going at the time almost on a weekly basis. I was a point of contact on any number of legal questions they would encounter with their congregation. Also the trips I would take to the border, to Nuevo Laredo, and the success we had with reuniting families. That was something new, and that we all sort of learned together.