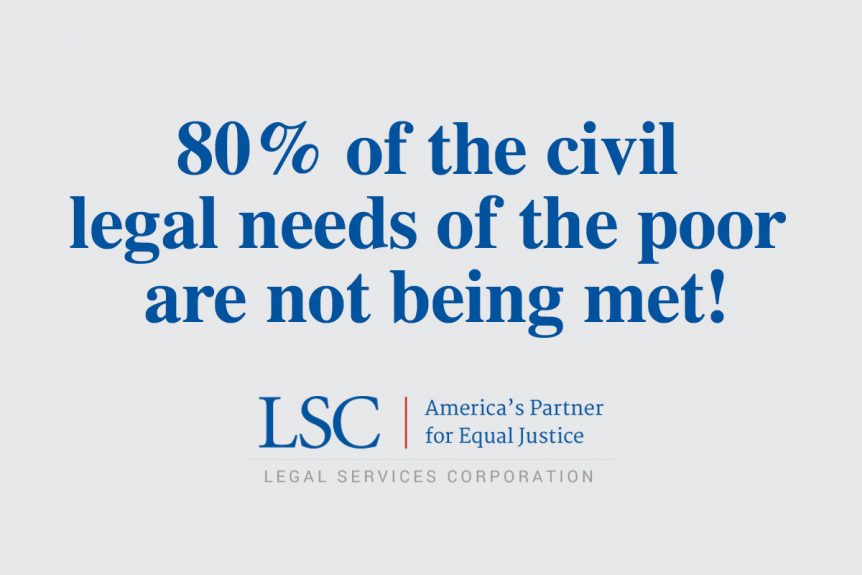 Originally published by Legal Services Corporation. Click here to read the story on their site.

State studies consistently show a higher percentage (80%) of the civil legal needs of the eligible population are not being met. Legal Services Corporation

State studies consistently show a higher percentage (80%) of the civil legal needs of the eligible population are not being met. A recent study by the Boston Bar Association found that in Massachusetts civil legal aid programs turn away 64% of eligible cases. Nearly 33,000 low-income residents in Massachusetts were denied the aid of a lawyer in life-essential matters involving eviction; foreclosure; and family law such as cases involving child abuse and domestic violence. People seeking assistance with family law cases were turned away 80% of the time.

New York’s recent findings confirm national data that less than 20% of all civil legal needs of low-income families and individuals are met. In 2013 more than 1.8 million litigants were not represented by counsel in civil proceedings in New York’s state courts.

Nationally, LSC grantees served nearly 1.9 million low-income persons in 2014. Millions more requested assistance but did not receive it because of the lack of adequate resources.