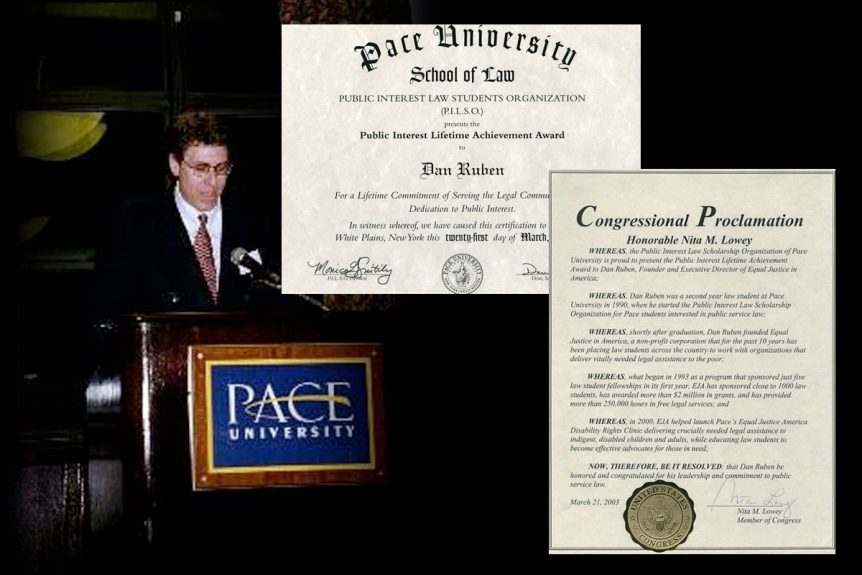 Dan Ruben, Founder and Executive Director of Equal Justice America has been awarded the Public Interest Law Students (PILSO) Lifetime Achievement Award at Pace University School of Law. Ruben received the award at a dinner event at Pace on March 21, 2003.

As a law student at Pace, Ruben was the founder of PILSO, an organization that raises funds to provide fellowships for Pace law students to do public interest work during the summer. Ruben started the organization, which continues to thrive, as a second year law student. He graduated in 1991 before launching Equal Justice America in 1993.

I congratulate Dan Ruben, a rare individual who has made it his life’s work to impact the community on a broad scale and give voice to those in need.Meredith Blake, Founder & Executive Director, Break the Cycle

“Dan left the school much stronger and richer than it was when he arrived,” said Pace Law Dean David Cohen who co-hosted the March 21st dinner with outgoing PILSO President Monica Snitily. “He did that by creating PILSO. But Dan not only created PILSO and left this wonderful legacy, he has also continued to support the Law School in very important ways.”

In the fall of 2000, Pace opened the Equal Justice America Disability Rights Clinic with a grant from EJA.

“Dan has done more for the practice of public interest law in this country than any other Pace law graduate,” Vanessa Morton wrote in an e-mail to her colleagues on the Pace faculty that was read at the March 21st dinner. Merton, in London for the spring semester, is the Executive Director of Pace’s nationally recognized clinical program, John Jay Legal Services, of which the EJA Disability Rights Clinic has become an integral part.

Meredith Blake, the Founder and Executive Director of Break the Cycle, an organization that works with young people to end domestic violence, sent a fax that was read at the PILSO dinner. EJA has recently joined forces with Break the Cycle and will sponsor a two-year EJA Fellowship for a Stanford law graduate to work in their new San Francisco office.

“I congratulate Dan Ruben, a rare individual who has made it his life’s work to impact the community on a broad scale and give voice to those in need, wrote Blake.

Ruben is the third person to receive the PILSO Lifetime Achievement Award. The first two recipients were Richard L. Ottinger, a former Dean of the Law School, a former member of Congress and a member of EJA’s Board of Advisors and Vanessa Merton.